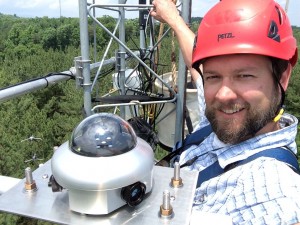 Dr. Tom O’Halloran is currently an assistant professor in the Department of Forestry and Environmental Conservation and stationed at the Baruch Institute at Clemson University.  Dr. O’Halloran designed, founded and built the main pine tower facility at SBC-LARS while he was an assistant professor of Environmental Science at Sweet Briar College, and continued to develop the site during 2015-2016 as a research assistant professor at Virginia Tech.  His research quantifies the ecosystem services provided by vegetation at the land-atmosphere interface, including carbon sequestration, energy balance regulation, and aerosol production.  He analyzes these questions using remote-sensing and modeling, but particularly enjoys working in situ using towers and field measurements.

Dr. R. Quinn Thomas is an assistant professor in the Department of Forest Resources and Environmental Conservation at Virginia Tech.  His research focuses on carbon, nitrogen, and energy cycling in terrestrial ecosystems using observations and models.  He uses models that range from statistical descriptions of forest change to global models that simulate forest-climate feedbacks.   Dr. Thomas  is primarily responsible for the eddy covariance system and ecosystem carbon dioxide exchange research at SBC-LARS. Dr. Brian Magi is an assistant professor at UNC Charlotte and is the newest collaborator (summer of 2016) at SBC-LARS.  He is currently operating a nephelometer on site to help quantify the contribution of aerosols to light scattering in the forest. 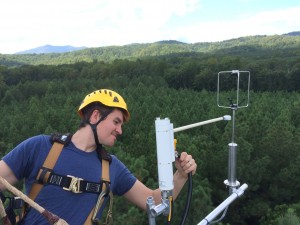 Ben Ahlswede is a Ph.D. student working at the tower with Dr. Thomas in the Department of Forest Resources and Environmental Conservation at Virginia Tech.  Ben plans to examine the difference in biophysics between  pine and switchgrass ecosystems as they sequester carbon from the atmosphere. 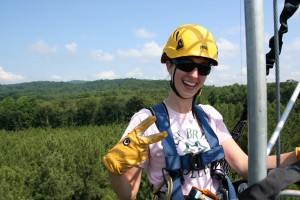 Verena Joerger performed her senior Honors research in Environmental Science at SBC-LARS during her senior year (2014-2015) at SBC.  She was the first student to work on the tower, and helped install the site in summer of 2014.  She presented her preliminary research at AGU in 2014.   She is currently pursuing graduate research in the Department of Earth and Atmospheric Sciences at Cornell University.

Emily Dallas performed her senior Honors research at the pine tower during the 2015-2016 academic year, and graduated from the department of Environmental Science at Sweet Briar in 2016. She became interested in the tower in the fall of 2014 when she used solar radiation and wind velocity data from SBC-LARS for her final project in Energy and Atmospheric Pollution class.   She presented her senior Honors research in the AGU Virtual Poster Showcase, where her paper was entitled: Investigating Effects of Forest Management on Light Use Efficiency in Loblolly Pine. 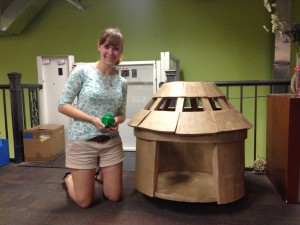 Kiera Cavalleri graduated from SBC in 2015 with an Engineering Science major.  Kiera is interested in environmental engineering topics on appropriate technology and beneficial reuse.  She especially enjoys innovative materials used for structures and water treatment.  After graduation she plans on working in the Navy Civil Engineering Corps.  Kiera fabricated the aspirated radiation shields for the temperature and humidity probes for the tower using the 3-D printer in engineering at Sweet Briar. 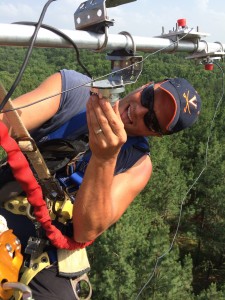 Dr. Jordan Barr is a  collaborator at SBC-LARS and a Data Scientist at Elder Research in Charlottesville, VA.  From 2009 to 2015, Dr. Barr was a Physical Scientist at the South Florida Natural Resource Center, Everglades National Park where he maintained a similar facility in the mangrove forests.  He was a major contributor to deploying much of the instrumentation at SBC-LARS.